This is the response my best friend wrote yesterday:

She wrote it in response to seeing this on her Facebook news feed: 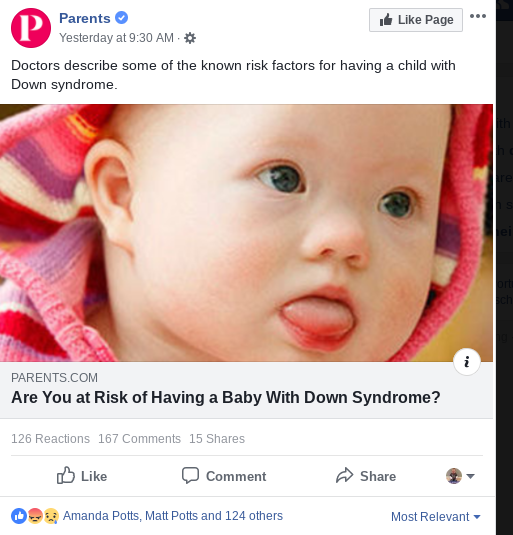 She didn’t tell me about it. I just happened to see it as I was scrolling through Facebook after Josie and Moses went down for their naps. I felt as though my heart stopped for a second, and then I started to cry. Those first tears were from being so thankful that she would speak up for Moses and every other baby/child/person with Down syndrome. Then I started reading through the comments others were posting about their own children with Down syndrome. That’s when the tears of sadness and anger started. There were multiple comments describing how upon learning that the results of genetic screening tests indicated the baby had Down syndrome, mothers were encouraged to abort the baby or start the process to give it up for adoption.

Are these kids so “risky” that they should be kept separate from the general population so as to not subject others to their almond-shaped eyes, flat profile, and slightly smaller ears? Do the “normal” people need to be shielded from seeing a person with Down syndrome’s tongue sticking out or the horizontal line that runs across the palm of their hand? Are doctors afraid that it might be too much for parents and the rest of society to deal with the low muscle tone or speech impairments that people with Down syndrome tend to have? Are they leary of joy that could follow after being around a person that is quick to smile and still get excited by the little things in life? Should these “risky” children should be eliminated before they become such burdens to society?

These are just some of the questions that I would love to ask those doctors that encourage termination of a baby with Down syndrome. I want to know the goal, the purpose, they have in mind when they suggest a parent give up their unborn baby, many times before having 100% confirmation that the baby does in fact have Down syndrome.  Are they trying to create the perfect society? Are they trying to spare the parents from heartache and pain? If that’s the case, then can they also figure out how to screen to know if a person will grow up to become a bigot? A racist? A drug-dealer? A human-trafficker? A murderer? A sociopath? A doctor that will support the killing of babies that are not “perfect”? Because if you ask me, those are the burdens to society. How many people with Down syndrome are in jail? Have restraining orders taken out against them? Intentionally cause harm to others? Encourage another person to end another human’s life? Hmmmm….

As for those doctors and anyone else that supports the termination of a baby because it has Down syndrome or any other disability or birth defect, I will pray for them. I will pray that they have a change of heart and choose to support the life of someone like Moses. For those doctors that do not change their views, I will pray that they lose their medical license so that they are no longer a burden to the Down syndrome society. I’ll let God decide which prayer to answer.

[Note: I will say that I did read the article and it doesn’t necessarily support the abortion of a baby with Down syndrome. It does give information about genetic testing and even goes on to say towards the end that the information that the baby has Down syndrome can help doctors monitor the pregnancy more closely to ensure the health of the baby. However, by using the term “risk”, the author did reinforce the thought that having a baby with Down syndrome is a negative thing. I am not okay with that.]